Is anarchy threatening the Internet? Get an inside look at the hackers who disrupt corporations as a form of activism. Don’t miss CNN Presents at 8 p.m. ET Saturday as Amber Lyon takes you inside the secret world of “Anonymous.”

New York (CNN) — “Expect us” is the favorite tag line for an endless stream of Web videos posted by the Internet collective known as Anonymous. It’s a promise and a threat. In 2011, galvanized by the national Occupy movement, Anonymous delivered.

“This is what happens when the people have had enough,”

said “Troy,” a member of the collective who joined the street protests in New York. “This is what happens when greed goes unchecked. It’s the closest thing to a global revolution we’ve ever gotten.”

From the inception of Occupy Wall Street, Anonymous has had a powerful impact on the movement, promoting it tirelessly through social media in the early days; driving it forward with Internet campaigns, known as “ops,” targeting bankers and politicians; and ultimately acting as a savage and effective counterforce to what the group sees as a militarized police state.

‘Video on how Anonymous’ confronts police

“Hopefully, he’ll think twice before he pulls out his baton against somebody who’s holding a sign saying we just want peace,” said Troy, who spent weeks monitoring and videotaping New York Police Department officers during the height of the Occupy Wall Street protests.

The list of police officers and agencies targeted by Anonymous is long. From New York to Oakland, California, cops had their Web sites hacked; personal information, including the home addresses of specific police officers, was posted online; and officers who used pepper spray on Occupy protesters, including NYPD Deputy Inspector Anthony Bologna and Lt. John Pike at the University of California-Davis, saw their entire life histories blasted out in Web videos and document dumps.

“I think [police] see it as a form of vigilantism,” said professor Gabriella Coleman,

The online intimidation is intended both to punish errant police and serve as a warning to riot cops facing difficult decisions in the heat of often chaotic protests.

Police are reluctant to speak publicly about the collective’s activities because Anonymous is so quick to target critics. But privately, they’re furious, especially when Anonymous posts the names of family members.

Occasionally, the battle between police and Anonymous erupts on Twitter. Last year, a Los Angeles homicide detective who goes by the name @LAMurderCop had his personal information dumped online, and he retaliated with a series of sarcastic tweets.

“Let it be known to all,” he wrote, “your mainly teenagers in your moms house. U have no skills.”

Anonymous is also the subject of several federal and state investigations, including one by the commonwealth of Massachusetts, which issued subpoenas to Twitter in an investigation of threats directed against Boston police after the department’s website was hacked.

Like police, members of Anonymous are also reluctant to speak publicly, both for their own security and because it runs counter to their deeply held belief that the positions held by the collective, expressed through the rolling democracy of the Internet, are far more important than the opinions of any individual anon, or person who participates in Anonymous activities.

“Troy” agreed to talk to CNN on camera provided we not reveal his real identity.

“There’s no specific group or one person that talks for us,” he says.

“It’s more like a hive; an idea is brought up and … if the overwhelming majority of people agree with it, then we go with it.” Monitoring and exposing what they see as police misconduct is one of the ideas that caught fire.

In one Internet relay chat session, members of the collective who go by the online handle AnonymousIRC said police need to understand that the Internet is unpredictable and uncontrollable.

According to Occupy Denver, Police shot a 21 year old protester out of a tree.

“We cannot control or limit what some individual anon may or may not do, neither is it in our interest,” they said. “If some cop finds it funny to mace innocent girls, Internet crowd will hate him. Which will include his family. Like it or not, it’s just what happens.” 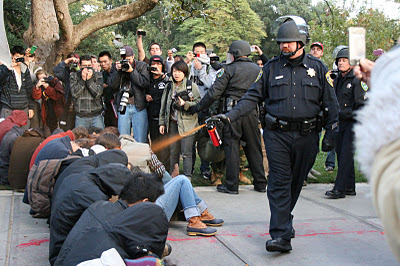 This year is expected to bring

more protests centered on high-profile gatherings, such as the NATO and G8 summits in Chicago in May and the political conventions in late summer. In the past, those kinds of events have been marked by sometimes violent clashes between protesters and police. This time, Anonymous will be watching.

by By Steve Turnham and Amber Lyon via CNN

One Comment on “Cop watchers: Anonymous vs. police [vid]”