10 Ways to Maximize Your Group Projects

For those that prefer to work alone because they can “do it better and faster,” a group project might be a nightmare. There seems to always be that kid who does absolutely nothing yet skates by with the same, undeserving grade as you. But have no fear because we’ve researched ten tips for maneuvering yourself to get the most out of working with a group.

1. If possible, be the leader.

It’s easiest to stay in control of the group as, you guessed it, the leader. If you’re the first one to offer to take the roll, it is unlikely that someone will want to contest with you (but if they do, perhaps they also read this article). As a leader, first begin by assigning roles based on the interests and perceived strengths of the people in your group. If you have a member that is extremely shy, don’t place them as the keynote presenter. Be strategic and allow for everyone’s input, while still taking charge. “I always give special slack to students who take on the role of the leader in the group. I know it’s hard to behave that way towards peers, especially those you may not know personally,” said Professor Saraj at Tufts University.

Now that everyone knows their respective position, it’s important for everyone to know what their small tasks will be working towards; that is, the point of this group project. Make sure this is understood from the beginning and it will be of great help through to the end.

Assign due dates for each segment or each person’s work that is well before the final project’s due date. People will respect this attempt to keep the entire group on schedule and it will give you some wiggle room in the end when someone inevitably turns in their work late.

4. Be an active listener.

I’m sure you’ve heard this before, but it’s easier said than done. Focus on what your group members are saying without interrupting and encourage everyone to share their opinion, even if they are hesitant at first. It will establish an open group dynamic that will ultimately function better.

5. Watch out for Groupthink.

If you see people nodding in approval to every comment each other makes, they might be falling victim to this. In groups, people often are more open to accepting each other’s ideas, even if they think it is wrong. “I see students after they have done a presentation and received a bad grade and it’s always the same. The problems all come out during this meeting. It’s the first time they’ve ever voiced concerns or criticisms to each other because they were afraid to disagree. Ultimately, it left them upset with the results,” said Professor Malik from The University of Alabama. 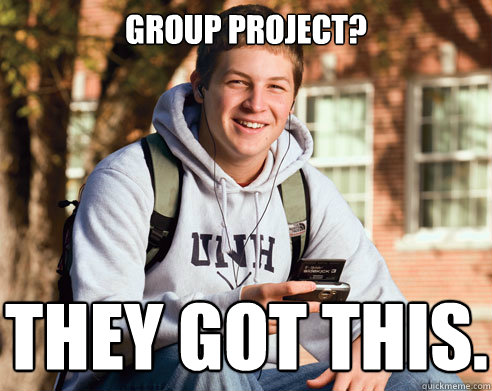 People often don’t want to be the leader because they assume it is the job with the most work. Often, it’s the other way around. You can delegate much (if not most) of the work to the rest of the members of your group and focus on supervising, collecting that info and synthesizing it in the end.

Or else you won’t be able to check in on that kid who still hasn’t turned anything in yet and it’s two hours away from the deadline.

8. Retain your position of authority.

If there is an issue with the group, take charge to resolve it quickly before it creates problems. You’re the leader; it’s your job to keep the group together.

If possible, grab a table in the library or a study room and have everyone work on their projects simultaneously. It will make a big difference in how cohesive your group becomes. Also, questions often arise when you start working, not before.

It doesn’t all have to be serious work. Meet for lunch in the cafeteria to go over initial plans and schedules, invite members to go out that night, or just have time to socialize. Don’t forget, we’re still in college.

6 Comments on “10 Ways to Maximize Your Group Projects”